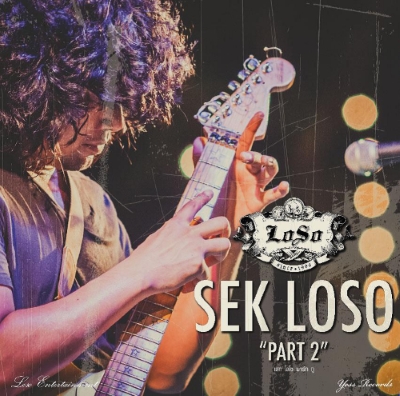 “Part 2” starts off with Sek’s first single and title track, “โสดตอน 40 / Soht Dtaun See Sip (Single at 40),” where he shrugs off his new middle-age status and messy divorce and announces he’s still living the rock and roll lifestyle and a loss of public opinion of him isn’t going to discourage him. While normally I can at least respect artists who write songs that are basically just a big middle finger to their haters, there’s something about this song that makes me cringe a little. Maybe because the general public’s response wasn’t exactly a good one, and despite his best efforts, they still twisted his words into some pretty funny sarcastic comments. In this song, Sek claims he may have a dirty mouth but that his thoughts and actions are good. He says it’s human nature to hit people who bother you, and claims it’s disrespectful to secretly video people and share their dirty laundry. All these are references to the mess of scandals from the last couple years that brought on Thailand’s former rock god’s fall from grace; a violent scuffle on stage with a fellow musician at a concert, a video clip and pictures that started circulating on social media of the singer doing meth, and then his ex-wife going to the police and the media with her bruises and exposing him for domestic abuse during their drawn-out messy divorce. Though it’s been a few years, it seems like people aren’t quite ready to forgive him. Youtube and Pantip are riddled with sarcastic comments and parodies of his lyrics, like

“Single at 40? Should be called Wife-Beating at 40”
“Single at 40 and probably will still be single at 50”
“He probably sat down and wrote this after beating up some girl”
“People call him the Rock & Roll Superstar of Thailand? Who?”
“He says he thinks good and does good? Clearly all the drugs have meddled his brain”

and other negative sentiments about the galls of Sek to write a song so blatantly tooting his own horn like this. Ouch. But I guess you reap what you sew. At least the instrumentals sound nice.

Though a lot of comments were also expressing wistful nostalgia, missing the old Loso and the old Sek, I think a lot of the other songs on this CD do have that Loso feel to them. The second track, “Taxi,” goes back to Loso’s “Low society” roots and pays homage to the poor taxi drivers from Isan country in the northeast who drive around Bangkok for long hours, trying to make enough money to send their kid to a decent school. The guitar definitely reminisces Loso, while also changing things up and mixing nicely with Teddy Eiffel’s keytar solo.

The song “เธอเคยเป็นที่หนึ่ง / Tur Koey Bpen Tee Neung (You Were Once Number One)” has a very nostalgic feel of those classic Loso breakup songs. It showcases Sek’s signature rock voice so nicely with lovely poetic lyrics…until he tries to hit the high notes in the bridge. Eeek. It would have been such a nice, emotional, bittersweet romantic song with a lovely sound and fantastic guitar solo, if only he did without the voice-straining.

My favorite ballad on the album, “แม้เราต้องจากกัน / Mae Rao Dtaung Jahk Gun (Even Though We Must Separate),” was so good, it got two versions; acoustic guitar and piano. It’s such a fantastic ballad with that perfect melancholy mood that Loso was so good at, I can’t even decide which version I like better.

In the middle of the album, Sek threw in his emotional song, “ยอดดวงใจ ดวงน้อย ของพ่อ / Yaut Duang Jai Duang Noy Kaung Por (All of Dad’s Small Heart).” When I saw the title, my first assumption was that this was a song for his father, maybe apologizing for not exactly turning out the very best, or thanking him for all his work in raising him. Then, after listening to the song, I realized he was talking about himself. I had forgotten he had kids. Online sources say he wrote this song for his wife and kids, apparently wanting to let them know that he still loves them, even though time and happenstance had changed their lives so much. This song really humanized Sek for me, and I feel bad for him. His music career wasn’t the only thing that suffered from his poor choices and mistakes.

Following that, Sek decided to tip the scales in favor of more upbeat, rocking songs. Another of my favorites from this album, “อย่าถอยแม้แต่ก้าวเดียว / Yah Toy Mae Dtae Gao Diao (Don’t Take Even One Step Back)” is a wonderfully motivating song. I love inspiring, uplifting songs like this, reminding us that everyone suffers but we still need to find the strength to carry on.

“แอ๊ด คาราบาว (Aed Carabao)” is a flattering tribute of appreciation to the famous frontman of “music for life” group Carabao, who never stopped supporting Sek during his whole ordeal. He pulled him out of his depression and back into the entertainment industry, forced him to go on tour with him, and rekindled his inspiration for music, for which Sek is apparently very grateful for. Aed even then felt compelled to write a song in response to Sek! Translations of Aed’s response, “เสกไม่ได้ / Sek Mai Dai (Sek, No You Can’t),” can be found here~

By far my favorite track on the album is “ออกจากชีวิตฉันไปเสียที / Auk Jahk Cheewit Chun Bpai Sia Tee (Get Out of My Life),” as I just love bitter, angry, passive-aggressive songs. At first I kind of wished he sang this with more strength and audible anger in his voice, but the more I listened to it, the more I realized that this song describes a point beyond anger, when you’re just so sick and fed up with a situation, you don’t even have the energy to get mad anymore and you’re just like, screw it. Done. And now I feel the level, collected voice Sek used is very fitting.

Wrapping up the album with a hard rock song is อยู่ตลอดไป / Yoo Dtalaut Bpai (Here Forever),” in which Sek reassures his fans that he’s a changed man and that he’s going to continue doing what he does.

While, to be honest, I did lose so much respect for Sek as a person when the allegations of drug use and wife-beating just kind of exploded in his face, at the same time, I don’t think some poor personal choices and life decisions can really erase his legacy; he was one of the forerunners who really molded the Thai rock scene, I do have to still respect him for what he’s accomplished and contributed to the Thai music scene, and it is nice to see him pushing past the negativity, (at least claiming he has) reformed, and not just letting it destroy everything he had. Minus his first single, the rest of his songs do seem to have a majority of positive responses, so he still has his fanclub still supporting him out there, so, I guess I wish him good luck with his indie venture and the next stages of his career~

Though the music videos were very low budget and a bit bland, the songs themselves had a homely indie feel to them, much like Loso’s beginnings, and I feel like this was a pretty solid release for Sek. All in all, putting aside any personal opinions towards Sek’s personal life and trying to focus solely on the music, I think I would rate it a 7/10.

If you like what you hear, I would encourage you to support the artists and purchase the album legally; it is available on iTunes, or, if you’d prefer a hard-copy CD, eThaiCD.com is a reputable dealer that offers world-wide shipping: Order your copy of Part 2 here, or the karaoke DVD here~

And, lastly, this was purely my opnion; feel free to disagree or share your own as well 😀