Posted by Tahmnong on January 26, 2013
Posted in: Artist Spotlights. 5 comments 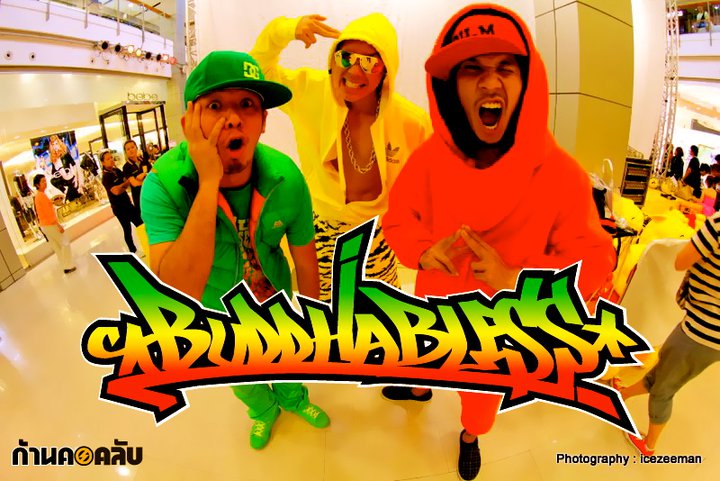 Kicking off the new (hopefully) weekly artist spotlight, who else would I start with other than my favorite artists of all time, Buddha Bless. Born from GMM Grammy rapper Joey Boy’s record label branch, Gancore Club, they were picked up performing their own underground hip-hop music during open mic night at a pub, finally releasing their debut solo album, “ไฟเขียว ไฟแดง / Fai Kiao Fai Daeng (Green Light Red Light),” which they wrote the lyrics and music for, and produced themselves, in 2006. Each member adopted one of the three colours of reggae; red, yellow, and green; and focused their style around the dancehall reggae genre, which was fairly obscure in Thailand at the time, mixing their own flavors and Thai elements into their music. Though their main style is dancehall reggae, they still manage to dabble in and incorporate many other Caribbean styles, like reggae, reggaeton, soca, and bossa, as well as going back to their roots with general hiphop.

Enjoying rising success since their debut, Buddha Bless contributed to the Gancore Club 2 album with the rest of the Gancore Club artists, released their second full-length album, กัด มันส์ ดุ / Gut Mun Doo (Bite Fun and Furious), in 2008, their first best-of collection, “Buddha Bless You” in 2009, and have had many singles and are still very active in Gancore Club since then. (Which I hope means a new album soon!)

Buddha Bless are great artists who try to write good music for the younger (and older) generations that include good messages and morals in them. They have songs about how you’re more attractive when you’re sober, against drugs, supporting sexual abstinence, about not losing your temper over little things, about how you shouldn’t kill yourself over a breakup, how you should turn to religion to deal with depression, and songs against materialism, and their latest single, “นม / Nom (Milk),” which is promoting drinking milk rather than alcohol. Thailand’s Buddhist Council even gave them an award for their lyrics! When they’re not spreading good messages, their songs include funny lyrics, catchy beats, and unique music videos, putting Buddha Bless into a league of their own for me.

I still remember the first time I heart their debut single, “Fire” on the radio. Of course, as a Thai-raised Puerto Rican, I can think of no better combination than Caribbean and Thai music, so it was love at first listen, and I’ve been a huge fan ever since. Not only do I have the utmost respect for artists who write their own lyrics and music, let alone produce themselves, but I’ve also seen Buddha Bless in concert more times than I can count, and let me tell you, they are not capable of putting on a bad performance. Just not capable. They have such energy and charisma, the show could be in a pitch black room with no speakers set up and it would still be the best concert you’d ever attended. Lastly, I’ve been lucky enough to have met many Thai celebrities personally, and if you asked me who was the nicest artist I’ve ever met, I would without a second of hesitation answer “Buddha Bless.” These guys are so kind and appreciative of their fans, and so down-to-earth and genuine, they’re in the music industry first and foremost because they enjoy making music and want to share it with others, and it really shows. And this is why I love these guys more than anything else in the world hahaha 😀 <3