Posted by Tahmnong on March 22, 2013
Posted in: Artist Spotlights. 4 comments 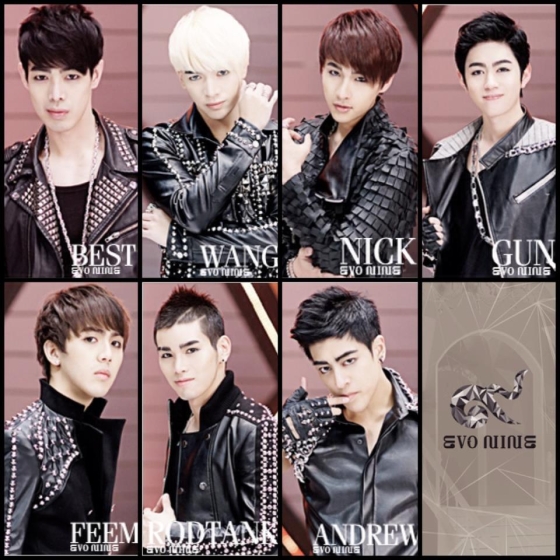 Best
Real Name: Anawil Chaat-thong
Nationality: Thai
Education: Studied archatecture at Assumption University
Talent: Multi-style dancing
Favorite sports: Swimming, tennis
Collects: Hats, shoes, and models of famous buildings
Profile: The leader of the group, Best joined a dance club while studying abroad in Singapore, and ever since then he changed his former dreams of studying at Harvard and instead focused on becoming an entertainer and joined Evo Nine.

Wang
Real Name: Thammada Koonajak
Nationality: Thai
Education: Studied biomedical sciences at Rangsit University
Talent: Multi-style dancer
Collects: DVDs
Profile: Wang has been singing and dancing ever since he was a child. Instead of toys, he preferred a dance studio and studio equipment where he could practice instead. Thanks to a friend who convinced him to try out for Evo Nine, he was the first member selected for the group.

Nick
Real Name: Patipat Kittigatagool
Nationality: Thai
Education: Currently studying mass communication at Chulalongkorn University
Talent: Cooking
Favorite sport: Badminton
Collects: Comics
Profile: Nick is the elder brother of Net Candy Mafia. After going with his sister to so many of her dance contests, he himself fell in love with dancing and decided to try out for Evo Nine, though he didn’t expect to get in. After experiencing the process of training and success from Candy Mafia, Nick is the encouragement of the group, always reminding them that their hard work will pay off.

Gun
Real Name: Rushanun Ruanpetch
Nationality: Thai
Education: Saint John High school
Talent: Singing, dancing and guitar
Favorite sports: Tennis, table tennis, and swimming
Collects: Kamen Rider models
Profile: Gun is the youngest member of the group, but has taken on the role of being the optimistic one and motivating the group. Gun was recommended by his vocal school to audition for Evo Nine. Though he was younger than the other chosen members, his talents were impressive, and he was added to the group.

Feem
Real Name: Shitipat Suppayanont
Nationality: Thai
Education: Studied the Aviation Business Program with a major in tourism and services at Rangsit University
Talent: Basketball dribbling
Favorite sports: Football, Basketball
Collects: Novels
Profile: After losing a previous boyband audition he had tried out for, Feem decided to give it another go with Evo Nine, starting over from the bottom and getting used to the 4-6 hour a day / 6 days a week training schedule necessary to be a top performer.

Rodtank
Real Name: Satapat Ratanotai
Nationality: Thai
Education: Studied mass communication at Bangkok University
Talent: Guitar, Piano
Favorite sports: Badminton
Collects: Movie tickets
Profile: Rodtank has always desired to be a singer and actually had auditioned previously to be signed by Mono Music. Though he failed his first audition, he didn’t let that discourage him and tried again for Evo Nine’s auditions. His persistence impressed the Mono Music staff, and he was given a chance to chase his dreams with Evo Nine.

Andrew
Real Name: Sarunyu Sarutisut
Nationality: American-born Thai
Education: Studied the English art program at Assumption University
Talent: American football
Favorite sports: Basketball, Working out
Collects: Music CDs
Profile: Andrew was born and raised in America, where he was influenced by American music. After moving to Thailand, he was persuaded by Mono Music to audition for Evo Nine as their English rapper. Because of his fluency in English and familiarity with the style, he passed the try-out with flying colors and became a member of Evo Nine.

Band Bio:
Evo Nine is a new group, publicly debuting with their break-out single “Make You Dance” in early 2013, though the birth of Evo Nine actually happened quite a while ago. The Evo Nine project began with auditions in 2009 for talented members to join an upcoming boyband. Hundreds of boys passed the preliminary round and began going through rigorous training, while all the while every three months, trainees would be eliminated. After four years of fierce competition, the seven remaining members became Evo Nine as you know them.

Evo Nine is backed by an American production team headed by Glen Choi (aka DJ Nure) who has contributed to many successful artists in the past, including the Black Eyed Peas, Wonder Girls, and Kanye West. They’re also trained by Korean choreographer Park Seung Min, while their debut music video for their song “Make You Dance” was written and produced by Korean production company Zanybros, who have been responsible for many successful Kpop music videos. Co-produced by both a Thai and Korean producer (Ratchapol Chitpuengtham and Ko Hee Jong), it’s no wonder Evo Nine has a strong taste of the Kpop flavor currently so popular throughout Asia, and they’re bound to appeal to many.

The origin of their name is quite clever; “Evo” is short for “Evolution,” and the number 9 in Thai is pronounced “gao,” which is pronounced the same as the Thai word ก้าว (Gao), which means “to advance” or “move forward,” thus “Evo Nine” = “The evolution of moving forward.” They kept the English pronunciation of “Nine,” as it is pronounced similar to the Thai word นาย (nai) which means “Mister” or “male,” which also implies that the group is the evolution of boybands.

Though I’m still resisting the Hallyu craze, I respect the time and effort both the members and staff has put into the group, and it’s nice to see a hybrid Thai-Korean company working together so well like that that I do have to give them props. I especially like that their song has perfect English grammar and their pronunciations are pretty completely understandable and not horribly marred by nonsensical Engrish and thick accents like a lot of other groups. Evo Nine has a lot of big names supporting them, so I think they have a lot of potential to make it big not only in Thailand, but perhaps internationally as well~ Only time will tell!