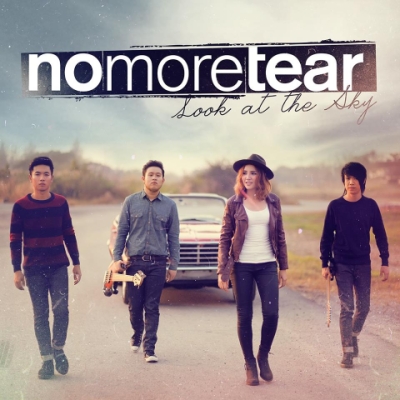 Let’s start with the singles. No More Tear had released four singles since early 2012 leading up to their second album.
The first one was their song “ความพยายาม / Kwahm Payayahm (Determination).” Despite their change in styles, I didn’t think this song was that bad. I liked the beat and the melody of it, and I most specifically liked the metaphor they used in the lyrics about love being like water seeping through sand, and no matter how much effort was put into the relationship, it all just disappeared and wasn’t reciprocated. I thought it was a unique and poetic way of wording it, and won me over on the new song.

Second was their Thai self-titled song, “ไม่มีน้ำตา / Mai Mee Num Dtah (No More Tears).” I thought this was a good song for their namesake. Again, I love the lyrics with the positive message of moving on and not dwelling on or making yourself depressed over a failed relationship. I liked its upbeat melody, but the mostly black and white/muted-colored music video was just too different from the brightness that once attracted me to them, so this is a song I prefer to listen to without the accompanying MV.

Third was their single “พักผ่อนไม่เพียงพอ / Puk Paun Mai Piang Por (Not Enough Rest).” While it’s a little slow for my tastes, it does have good lyrics about not wanting a friend to be just a transitional guy and asking for more time to get over a recent breakup before diving into a new relationship.

And fourth was their latest single, “แสงสว่างที่ปลายอุโมงค์ / Saeng Sawahng Tee Plai Oo Mohng (The Light at the End of the Tunnel).” This one, try as I might, I just don’t like it. I don’t like the sound or style of it, it’s too slow, the music is too flat, and Fukfang’s voice is too weak for my preference. Also, while the main theme of the song isn’t bad about finding someone after you had given up on love that gives you new hope for a relationship, I don’t like how the lyrics keep referencing lines like “You’re what I’m living for,” “You make my life worth something,” “you give me value,” etc. I’m someone who firmly believes that NO ONE can determine the value of your life besides YOU YOURSELF ALONE. Don’t ever let anyone try and tell you otherwise, and don’t ever base your opinion of yourself and the value of your life on a relationship or someone else. Ever.

But, singles aside, the album also has 6 pretty solid B-side tracks. Honestly, I find I like the B-sides even more than the singles!

My favorite two songs on the album are their tracks “แล้วจะให้ทำยังไง / Laeo Ja Hai Tum Yung Ngai (Now What Do You Want Me to Do?)” and “Diary.” These two songs I feel still have their old style to them; they’re very punk rocker and upbeat with strong, positive lyrics. I wish and hope that if No More Tear decides to release any other singles from this album, that it’s one or both of these songs. I love them, and I think they deserve music videos and radio time.

My second favorite B-side is their song “สุดท้ายก้แต่ขอโทษ / Soot Tai Gor Dtae Kor Toht (In the End, There’s Only Apologies).” It’s another upbeat number that I do like and wish it was also a single.

Their song “ดีกว่าเสียดาย / Dee Gwah Sia Dai (Better than Regrets)” is a nice easy-listening number. Not my favorite, but definitely not bad.

If you prefer their ballads, No More Tear delivers with “เหมือนเดิม / Meuan Derm (The Same)“~ Though it is a nice ballad music-wise, for me I personally felt like Fukfang’s voice was too static throughout it and didn’t carry the strength or emotion in it that I know she’s capable of from former ballads like the older “รักเคยดีกว่านี้ / Ruk Koey Dee Gwah Nee (Love Was Once Better Than This).”

Lastly, the only song I didn’t particularly like (aside from their fourth single) was their song “ในวันที่ไกลจุดหมาย / Nai Wun Tee Glai Joot Mai (On a Day We’re Far Away From Our Goals).” It sounds like…American country pop. o_O Which isn’t necessarily a bad sound, but it just sounds so strange coming from No More Tear, I’d never imagine them straying down that road, and so the song just didn’t sit well with me.

But overall, this is a pretty solid album and I don’t really have any complaints. I guess everyone has to grow up sometime, and No More Tear have decided to leave their punk rock style and rebellious teenager lyrics behind them as they exit adolescence~ I gotta give this album an 8/10~ I’m still a fan and still looking forward to hearing how they evolve in the future!

If you feel the same as me, I encourage you to support the artists and purchase it legally; If you’re not living in Thailand, eThaiCD.com is a reputable online dealer who offers it world-wide , or it is available for mp3 download on iTunes or Amazon.com 🙂