Posted by Tahmnong on February 2, 2013
Posted in: Artist Spotlights. 11 comments 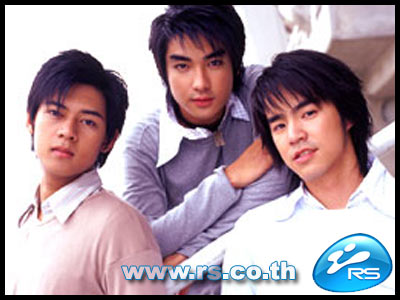 D2B began when, Dan and Big, competed in the Panasonic Star Challenge singing contest. Third member Beam was added to form the trio, and D2B was born. Their name came from taking the first letters of each of their nick names (Dan, Big, and Beam). In 2001, the group released their debut single, ต่อหน้าฉัน…(เธอทำอย่างนั้นได้อย่างไร) / Dtor Nah Chun…(Tur Tum Yahng Nun Dai Yahng Rai) [How Could You Act Like That Right In Front of Me?], which instantly became a hit, by the time their second and third singles came out, D2B had already rocketed into popularity. They claimed the Most Popular Group of the Year award in 2002 and 2003.

The trio reached the peak of their success in 2003, after their hit จะโกหกกันไปถึงไหน / Ja Goh Hok Gun Pbai Teung Nai (How Long Will You Lie to Me?) hit the airways and their third album, Type II, was released.

The happiness of their success was soon overshadowed by tragedy on July 22, 2003, when Big fell asleep at the wheel driving home from a concert late at night and ended up flipping his car into one of the drainage ditches lining the streets. Though Big was unhurt from the accident and released from the hospital the next day, he began complaining of headaches, which after a month became so severe, he had to go back to the hospital. It was then that it was discovered that Big had ingested a fungus from the dirty water of the drainage ditch that had traveled through his blood stream to his brain, causing a massive brain hemorrhage and bacterial infection, which left him in a coma.

Never giving up on their friend, after a year, the two remaining members, Dan and Beam, had a concert to remember Big’s legacy, encourage his recovery, and earn money for his hospital bills, and each of them wrote a song for their fallen bandmate. After two years that Big remained in a coma, Dan and Beam decided to continue on their music careers as a duo, and released several albums as Dan-Beam. After their final album, DB2B, which all profits from sales would go to Big’s hospital bills, Dan announced in an interview that Sony had been giving him offers for a solo recording contract. Angered that Dan didn’t seem to be planning to renew his contract, their record label RS split up the duo and banned Dan for the remainder of his contract, while Beam continued with a solo career with RS.

Shortly after the break-up of Dan and Beam, after four years in a coma, Big finally succumbed to a blood infection and passed away on December 9th, 2007.

Though I can admit that D2B may not have necessarily been the most talented singers in the world, I still believe they deserve every ounce of fame they received, and shouldn’t be forgotten by future generations. I love D2B the most for the legacy they left behind. First, they were a media-made group, meaning the record label put them together, they were never friends who decided to start a group together, yet they became the best of friends. Not many media-made groups are like that nowadays. The loyalty they showed to their friend was so moving, and the way the fanclub all over the world came together in support of his medical bills and conditions was amazing to experience, I feel lucky that I was a part of it. Big’s accident also brought to light the problems with public sanitation in Thailand, and projects were started to make sure the drainage ditches were clean. Lastly, D2B was one of the pioneering groups that pushed the music fad from the duos that ruled the 90s to groups of 3+ members.

I continue to support the remaining members of D2B to this day 🙂
Dan has a solo career, writes songs for several Sony artists, and directs, manages, and produces his own boyband, VWillz.
Beam has turned his focus on acting and has starred in many movies and lakorns, and I’m excited to see where Grammy will take him singing-wise.

If you’re new to Thai music or looking for more artists to get into, I would definitely recommend D2B~ They will always be in my heart ^^